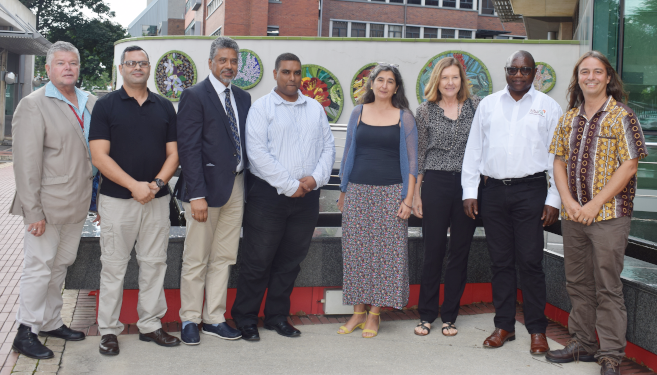 The College of Health Sciences’ (CHS) inaugural Research Day provided a platform for professors and high impact researchers to share their research.

‘This event showcases research by our professors and high impact researchers,’ said CHS Deputy Vice-Chancellor, Professor Busisiwe Ncama. ‘Researchers should take cognisance of the fact that the research they do should change the lives of ordinary people. Skills transfer to capacitate the younger generation of researchers is also fundamental; thus, research collaborations and mentorship remain a priority.’

Public Health Research Professor Moses Chimbari presented his work on health challenges in the context of the socio-ecological environment (the ecohealth approach). Chimbari previously served as Deputy Director at the Botswana Okavango Research Institute; Director of Research and Innovation at the Zimbabwe National University of Science and Technology and Director of the Zimbabwe University Lake Kariba Research Station. He has produced 115 publications on vector borne diseases and health systems research, has graduated 25 PhD and 11 master’s students and is currently supervising 19 postgraduate students and four Postdoctoral Fellows.

He is the co-Deputy President of Ecohealth International; co-Deputy Director of Tackling Infections to Benefit Africa (TIBA), an African-led multidisciplinary research programme that draws lessons from the ways that African health systems tackle infectious diseases; and a member of the Global Health Community Engagement and Involvement Advisory Network of the National Institute for Health Research (NIHR) in the United Kingdom. He served on the advisory committee of Ecosystem Services for Poverty Alleviation from 2011 to 2015.

Professor Tulio de Oliveira presented his research on, challenging the status quo and creating an environment in Africa that produces the highest level of science and brings innovations to the market. A bioinformatician, de Oliveira is the recipient of two prestigious fellowships. He was a European Commission Marie Curie Research Fellow at the University of Oxford from 2004 to 2006 (where he was selected as one of the top 20 inspiring researcher fellows in Europe) and was awarded a Royal Society Newton Advanced Fellowship at the Wellcome Trust Sanger Institute and University of Edinburgh from 2015 to 2019. He was the Director of the Genomics Programme at the Wellcome Trust Africa Centre for Health and Population Studies in Mtubatuba and an Affiliate Senior Lecturer at the Division of Infection and Immunity at the University College London (UCL) from 2009 to 2016. In 2015, he was promoted to Professor at UKZN and in 2017, founded the KwaZulu-Natal Research Innovation and Sequencing Platform (KRISP) at UKZN’s Nelson R Mandela School of Medicine. KRISP aims to create a scientific environment in South Africa and Africa that delivers high level science, creates innovation and reverses the brain drain.

Professor Inge Petersen’s paper was titled, Scaling up integrated mental health care in South-Eastern Africa and generating evidence and local capacity. Petersen moved across from the Discipline of Psychology at UKZN in 2016 to take up the directorship of the Centre for Rural Health (CRH) in the CHS.

She was appointed Research Professor at the beginning of 2019. The CRH engages in collaborative research with the Department of Health to support health systems reforms towards universal health coverage. Her personal research focuses on integrated mental health care in low- and middle-income countries over the past 15 years she has played a leading role in a number of research consortia and studies in sub-Saharan Africa and Asia that have used intervention research to investigate and drive the integration of mental health with primary health care. She is currently the lead Principal Investigator of a National Institute of Mental Health (NIMH)-funded U19 Hub, the Southern African Research Consortium for Mental Health Integration (S-MhINT) that involves South Africa, Mozambique and Tanzania and capacitates local stakeholders to drive scale-up of integrated mental health care.

Ramsuran graduated with a PhD from UKZN for his research on the host factors associated with HIV disease. He spent almost 70% of his time during his PhD study at two international laboratories, the Fred Hutchinson Cancer Research Center and the University of Texas Health Science Center at San Antonio.

Following completion of his PhD, he was invited to join the Ragon Institute of Massachusetts General Hospital (MGH), and Harvard as a postdoctoral research fellow and had a joint affiliation with a contractor to the NIH and The National Cancer Institute (NCI). Ramsuran is a UK Royal Society Future Leader African Independent Research (FLAIR) Fellow, Group Leader at KRISP, Associate Scientist at the Centre for the AIDS Programme of Research in South Africa (CAPRISA) and a guest researcher at the National Cancer Institute at the NIH. He has authored several high impact publications and has received numerous honors and awards. He serves as an editor of two leading international immunology journals.

Professor Beatriz De La Torrez spoke on Solid-Phase Peptide Synthesis: Making Greener research. De La Torrez holds a PhD in Chemistry from the University of Barcelona in Spain. She served as the Director and was an Associate Researcher at the Oligonucleotide Synthesis Facility at the Consejo Superior de Investigaciones Cientí­cas (CSIC); and was appointed an Honorary Research Fellow at UKZN in 2014, and as professor in the School of Laboratory Medicine and Medical Sciences in 2017. She has published 175 peer-reviewed articles in international journals.

Dr Mitsuaki (Andrew) Tomita presented his research on, Exposure to Waste Sites and its Impact on Multiple Health Outcomes: A Panel and Geospatial Analysis of Nationally Representative South African Data. Tomita is a senior lecturer in UKZN’s School of Nursing and Public Health. He is a social epidemiologist who focuses on interactions between HIV, tuberculosis, the community environment and mental health in South Africa. After completing his PhD at Columbia University, he moved to UKZN where he has conducted several HIV/TB and mental health services studies in KwaZulu-Natal funded by the NIH Fogarty International Center (FIC) and the National Institute of Mental Health (NIMH) as part of the prestigious Fogarty International Clinical Research/Global Health Research fellowships. He is a senior researcher in the UK/SA Medical Research Council Joint Initiative on Mental Health project and leads population health research for several research groups at UKZN.

Dr Richard Lessells’ presentation posed the question, Can we Stop Worrying about HIV Resistance with the Roll-Out of Dolutegravir? Lessells holds a PhD in clinical research from the London School of Hygiene and Tropical Medicine and is currently based at the Africa Centre for Health and Population Studies. Funded by a fellowship from the Wellcome Trust, his research evaluates TB and HIV diagnostics, with a particular interest in drug resistance. He is a Research Group Leader at KRISP and an associate at the Centre for the AIDS Programme of Research in South Africa (CAPRISA) and in the Infectious Diseases Department at the Nelson R Mandela School of Medicine.